Trincomalee is one of two Leda class frigates built for the Rpyal Navy by the East India Company in Bombay (now Mumbai). She was built of teak, a highly durable timber which largely accounts for her survival. Trincomalee was launched in 1817, 12 years after Trafalgar and the death of Nelson. and was designed to carry 46 guns. She was not commissioned until 1847, when her obsolescence was offset by the good condition of her teak hull. She served in the north and south Atlantic, and the Caribbean, and then in the Pacific. In 1860 Trincomalee became a drill ship, and was then the training ship Foudroyant until 1986. Restoration began the following year and was completed in 2005. Trincomalee is now the oldest ship afloat in Europe, and still retains over 60% of her original timber.
Read More 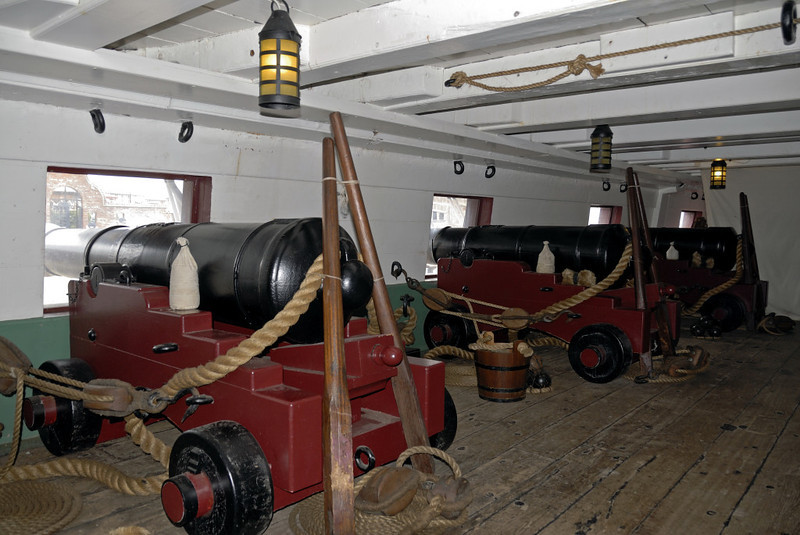 HMS Trincomalee, Hartlepool, Tues 10 August 2010 18. If Trincomalee had been commissioned when built, her main armament of 28 18-pounders would have been mounted on the gundeck as these replicas illustrate. These guns were obsolete by the time she did actually commission in 1847, so she was given fewer but more powerful guns, 26 in all. On her gun deck were 12 heavy 32-pounders firing solid shot and six 8-inch guns firing explosive shells. On the quarterdeck were two 56-pounders and six light 32-pounders, all firing solid shot.